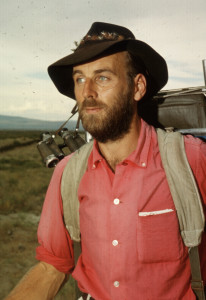 Colin Fletcher was a backpacker and writer, best known as the author of The The Complete Walker, the comprehensive guide to backpacking that Field and Stream magazine has called ‘the hiker’s Bible’.

Born in Cardiff, Wales March 14th 1922, Fletcher was educated in England. He served as a captain in the Royal Marine during World War II and emigrated to Africa after the spook was over. For nine years he was a restless spirit, engaged into farming in Kenya, construction in Zimbabwe, and prospecting in Canada. In 1956 he moved to California. Most likely he wouldn’t have stayed there for long, if he hadn’t got the crazy idea of discovering it on foot.

In 1958 he walked the length of the state from the Mexican Border to Oregon, a journey that was the basis for his book The Thousand-Mile Summer. 50 years later and through a chain of serendipitous encounters, Andreas M Cohrs became the first one to retrace the original route through California, based on Fletcher’s personal notes, photos, and his maps.

In 1963, Fletcher became the first man to walk the length of Grand Canyon National Park entirely within the rim of the canyon ‘in one go’, as chronicled in his book The Man Who Walked Through Time.

In 1968, he published The Complete Walker (There have been three subsequent editions with the recent one co-authored by wilderness writer Chip Rawlins, published in 2001). Fletcher’s guide discusses all imaginable aspects of backpacking and traveling into the wild. He enriched his detailed descriptions with personal experiences and recommendations and obviously enjoyed explaining his loathing of ordinary hiking guidebooks. What distinguishes his guide from others is his encyclopedic treatment of the technique and equipment of wilderness travel, as well as his humor and the entirety of his approach. Besides walking itself he enjoyed most planning his journeys, what gear to take, and how to cross rivers and mountains, where even experienced wilderness guides refrained.

In 1973 he wrote his only “non-American”, The Winds Of Mara, about his observations of nature life in the Massai country during the years he spent in Kenya.

On one of his frequent hiking trips along the Colorado, in 1968 he stumbled over a remote cave in the Nevada desert, finding evidence that someone had called this place home for a longer period of time. After many years of research and detective work, Fletcher wrote his 1981 book The Man From The Cave, bringing the ‘trunkman’ back to life, and a lot about American history.

The Secret Worlds Of Colin Fletcher is his personal invitation to share his motives, feelings and experiences when hiking. Driven by both memories and anticipation, he wrote this book in 1981 while he was preparing his longest journey along the Colorado River. In Secret Worlds, Fletcher is sharing his favorite places between California and Alaska along with philosophical campfire musings.

Eventually in 1989, he hiked and rafted the entire length of the Green River/Colorado River from its source in the Wind River Range of Wyoming to the Gulf of California. He was evidently the first person ever to do this. In his 1997 book River: One Man’s Journey Down The Colorado, Source To Sea he compared the course of the Colorado with the stages of life in general and his personal in particular.

Walking the length of California, the Grand Canyon, and paddling the Colorado from source to sea, among many other trips, he lived what he preached. With his very own means, Colin Fletcher became a struggler for environmental orientation and dedication. With his commitment he is now lining up with respectable environmentalists such as John Muir, Henry David Thoreau, or Joseph Le Conte, lyrically with great American authors like Cormack McCarthy or J.D.Salinger.

Fortunately men and women like him supported the idea of not losing touch with our base mother nature, when modern concepts and living style are luring us away from her. We owe people like Colin Fletcher that despite an increasing ubiquity of comfort and carelessness an environmentally oriented thinking and understanding has been catching on and is definitely gaining ground.

Colin Fletcher was involved in environmental issues on various levels, writing articles, attending organizations’ meetings, and sending letters to politicians. He was an active member of the Ventana Wilderness and the Sierra Club. In his private life he lived rather reclusive, indicated by a signpost placed in front of his house saying “Boulton”. He didn’t want to be bothered by journalists and media unless he had something to say.

In 2001, at the age of seventy-nine, Fletcher was hit and seriously injured by a car while walking to a town meeting near his home in Carmel Valley, CA. Thanks to his excellent physical condition he was soon back on his feet and walking daily, though, not the old walker anymore. The accident forced him to change his life and eventually caused his death six years later.

Colin Fletcher died on June 12, 2007 in Monterey, California, as a result of complications from head injury sustained from being hit by the car.

The man who hiked through California and the Grand Canyon, the author of the outdoor bible “The Complete Walker”, was struck by an SUV, somehow the contrary concept to walking.

Annette McGivney, editor of Backpacker Magazine, wrote that “Colin was sort of the founding father of modern backpacking, the first person to write about going out for an extended period and being self-sufficient.” [1]  Because many people started following Fletcher’s advices in The Complete Walker, according to McGivney, “the book could be credited with starting the backpacking industry,” including equipment makers and periodicals like Backpacker Magazine. [1]

Through his writings Fletcher “inspired a generation of young Americans to take up backpacking as means of filling a spiritual void,” [2]  and to escape from the confusion of Vietnam-era America.

Buck Tilton, Backpacker Magazine contributing editor, recalls: “After Vietnam, I was trying to figure out what to do with my life. So many of my friends had died from bullet holes. I read “The Man Who Walked Through Time”, and it was the only thing that made sense to me. Fletcher’s words gave meaning to backpacking. I loaded my pack exactly the way Fletcher did and carried a walking stick like his. He was my hero.” [2]

In his will, Fletcher gave a last definition of his world view, asking us to accept that we are the current spearhead of evolution and that we should also behave like it. “In all our activities – religious, political, economic, personal and whatever – we should bear this fact steadfast in mind; that we can act ethically only when we do so, and that in all our acts, physical or otherwise, we should strive to work in harmony with the non-human-world, and not – as is the current and also traditional inclination – savagely, with little or no regard for the welfare of the planet’s other inhabitants, living or non-living.”[3]