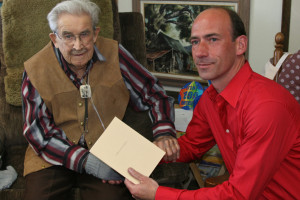 “We speak the same language,” said Owens valley’s eldest citizen to me, when I told him about my journey. California artist Carroll Thomas, who had just turned 98, presided over his gallery and studio at the northern entrance of Big Pine, located some fourteen miles south of Bishop.

After a four-hour walk, I had arrived at the small town’s general store, where I delved into my usual welcome-to-civilization ceremony, reading the local papers with a cup of coffee. In an issue of the 395 Magazine, I read an article about Thomas’ life and work, that he was still active, both in painting and in hiking, and I decided that I wanted to meet this man, who spent most of his life – to be accurate nine tenth – painting wildlife and landscape images. So I walked back to his gallery and introduced my wild life to him. 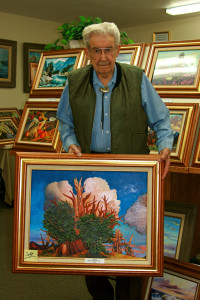 Sitting together in his studio and talking for about an hour, he almost put me to shame when he said, “It’s an honor to meet you, Andreas.” Nothing could have borne me out more than receiving confirmation for my endeavor from an almost a-century-old, respectable, and successful man, as the history I was walking through was not much older.

Carroll Thomas is not only the oldest living American painter, he is also still working both artistically and commercially in running his gallery and shop. He is a good listener, though he really enjoys talking about his own nature experiences, many of which he portrays in his paintings. One of his best and maybe the most famous work is a painting of a bristlecone pine tree, which is, as he said, native to his backyard, the southern slope of the White Mountains. Good company, I thought, what else could have been a better symbol for his age and his artistic perseverance. Other watercolors included the Rainbow Falls near Mammoth Lakes, Mount Whitney, the Golden Trout Lake, several encounters with bear, mountain lion, and elk, and many more landscapes throughout the West. In all of them I saw his love for nature, immortalized on canvas in a clear and plain expressive style. 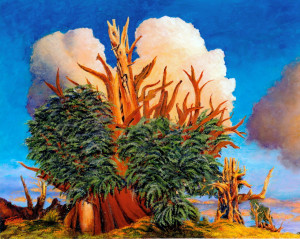 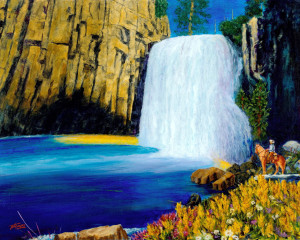 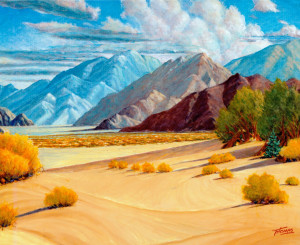 His ancestry is no less impressive, as I learned from a history lesson he gave me while looking at a colorful painting of a wagon. Being of Welsh-English- Scotch-Dutch-German origin, he narrated that his grandparents drove wagon trails from the East to the West, where they found home in Oklahoma until they fell victim to the course of events that later became one of the most dramatized episodes in Western history. In the heyday of homesteading, not only settlers were rushing new lands. Numerous outlaws were busily trying to run off homeseekers and secure the best spots for their own kin, among whom the notorious Dalton Gang became the Thomas family’s demise.

Thomas called all of them ‘Sooners’ and he accentuated this word in a way so I would understand it as an introduction to the following story that should shed a different light on a common fallacy. While the word actually described those who entered Oklahoma’s lands before they were officially assigned for open settlement, Thomas’ personal interpretation was a more substantive one. The term originally derived from the ‘sooner clause’, part of the Indian Appropriation Act, which defined that no one was allowed to claim land prior to the opening by the government. However, especially state employees, who were able to enter the new prohibited land legally, were abusing their status, marking out their preferred places for themselves or acting as fences; they got company by outlawed civil war veterans, railroad workers, surveyors, and even deputy marshals; the latter were said to be the worst. Those, who entered the unassigned territory illegally by the light of the moon in order to occupy their choice before the settlers would be there, initially coined the phrase ‘Moonshiners’, or ‘Sooners’. On the next day, when the land run officially began, almost 50% and, of course, the best parts were already taken by them. Just from the way Carroll narrated the story, from his clenched fists and an unforgiving glare in his eyes, one could tell that his own family had suffered from these events. He said they had been sent packing, unmistakably; then he lowered his voice, spoke slowly and emphasized every word. He leaned over to me and, for a short moment, I became aware of the incarnated history as he spoke: “Let me tell you this, Andreas, their behavior often was as lawless as the whole act, they’d sooner shoot than ask. This is why we called them Sooners.” 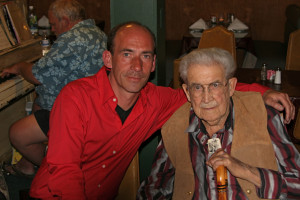 When we walked through the gallery, I was mainly looking for places I knew or scenes I had experienced on my walk. I found a desert landscape, reminding me of the plains in the east Mojave. There was the cougar, whose eyes reflected our encounter along the Colorado. And there were the bristlecone pines, among which I had spent my last night. But the picture that really captivated me was the falls I would hear in a week or two on my way to Mammoth. In that very moment, I could have said “Goodbye Carroll”, goodbye to big Pine, and walk straight into the Sierra to find them. I felt how I pondered my plans, what would keep me here, until I saw the next painting. Not knowing how or why, it just suggested to stay and look at it – or was it the luminosity of its colors outshining even the Falls? It was just a still life, a very vivid one, though, portraying wild roses overgrowing an old wooden coach. At its frame was a small note saying ‘Rossi’s’. interesting wordplay, I thought. 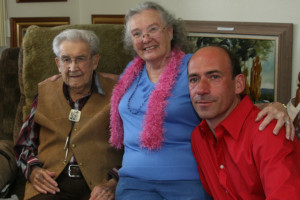 After we finished the tour through his gallery, we shook hands and just as if he wanted to point out again that we really spoke the same language, he picked his walking staff and left the house with me. While I was going back to town to find a place for the night, Thomas took off into his backyard for his daily hike through nature.

(Excerpt from the book California Serendipity. Please find more about ‘Rossi’s… and the Thousand-Mile Summer walk there.)

I was lucky to meet Carroll again for his 99th and his 100th birthday. On that last encounter, he had whispered to me, “Andy, this is all I wanted, the 100.” Four weeks later, his wife informed me of his last hike.