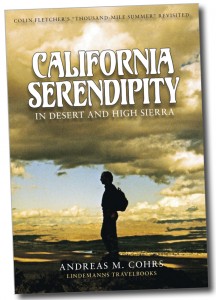 Andreas M. Cohrs presents an awesome guide to the less visited regions of California as well as a glance into what makes up the Golden State and its glittering mentality.

Through a chain of serendipitous events, Cohrs gained access to the belongings of the late backpacking icon, Colin Fletcher. Based on the outdoor guru’s original maps, notes, and photos, fifty years later he retraced The Walker’s hitherto untraceable thousand-mile journey along the lengthy spine of California, across the state’s enchanting deserts and over the snow-laden High Sierra.

With maps accompanying each chapter, drawn by Fletcher’s cartographer David Lindroth, more than 100 photos, and with stories from the trail, Cohrs tells a compelling tale of one of the most varied and fascinating regions on our planet.

Yet, as the title reveals, California Serendipity is more than a hiking guide that lays Fletcher’s original route at your feet for the first time. It takes the reader on a crash course through the state’s early history and its unique nature into finding the only true answer to Fletcher’s concern whether his 1958-trip could ever be repeated.

Cohrs’ writing appeals to two sorts of readers, those interested in the physical challenge, the incidents along the way and obstacles in the terrain and how he overcame them, and those interested in the reflections based upon observations and the social, emotional, esthetic, and intellectual significance of a long journey like this. In order to manage this balancing act, on one side he chose a chronological arrangement since many readers attach great importance to being able to follow the narrative of the geographical challenge. On the other side he merged the material into narrative essays and anecdotes to avoid repetition of routine activity.

With his narrative travel writing, Cohrs conveys the intimate sensations of what it means to venture upon a four-month trek, unpretentious but up close and affective, and why serendipity will travel with you, rewarding you with the most unexpected encounters, when you take the right turn. 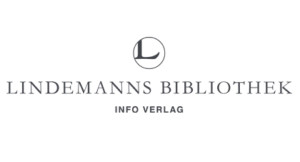 Publisher’s note: Be it fate or happenstance, while perusing a flea market, Cohrs came across a 99¢-copy of an old book, The Thousand-Mile Summer, written by acclaimed author, environmentalist, and backpacking icon, the late Colin Fletcher. The book documents Fletcher’s adventure to walk the length of California from Mexico to the Oregon border, a journey undertaken in 1958. Cohrs was so inspired while reading about this contemplative hike through the deserts and the High Sierra that he decided to celebrate a 50th- anniversary voyage, retrace Fletcher’s footsteps and find out if he was right in stating that “this trip could never be repeated”. While researching and planning the journey, serendipity struck again. Through a chain of the most incredulous events, Cohrs was granted access to Fletcher’s belongings and was therefore able to retrace the exact route based on the original maps, notes, and hundreds of photos.

So once again, a walker set out to take a look at America while comparing Fletcher’s observations from 50 years ago with today’s. Cohrs has written about and photographed California’s wilderness, its remotest places, the freaks of nature, and the various experiences and characters encountered along the way. The book is laced with interesting facts about flora and fauna as well as information about the earliest explorers and the history of the places that both Fletcher and Cohrs came to experience while passing through these less visited regions of the state.

Among the highlights were those experiences that occurred during times when his solitude while walking in the vast wilderness overlapped with brief sojourns in the small towns along the way. It was there that he discovered the hospitality of the people, unfailing good and kind and generous. Time and again when he walked into a small town, he was a king for a day. Perhaps the most unexpected encounter, though, and a great inspiration were the lessons one learns about oneself on an extended journey like this. 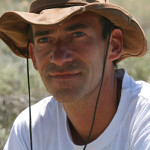 The author: Andreas M. Cohrs was born and educated in Karlsruhe, Germany, known as the gate to the Black Forest. He soon felt the gravity of nature when his parents traveled with him to the Alps and Southern Europe. At the age of fifteen, he began discovering the Americas, and during his professional career as a manager in music business, he combined the amenities of the entertainment capital of the world, Los Angeles, with adventurous outdoor trips into the wilderness. Eventually, the trans-California walk became the corollary for more than twenty years of visiting the state. On his travels, he enjoys most following the paths of our forefathers. While orientating himself on his senses and geographical realities, he tries to comprehend what it must have meant to those who paved today’s historical trails.

The Thousand-Mile Summer walk, the experiences made en route and the reflections he wrote about, stand for his credo about the importance of learning about our environment that includes both our natural and our human history – and oneself in interacting with it. California Serendipity is a journal well suited for demonstrating what our senses are for, including our sense of wonder, or awe.